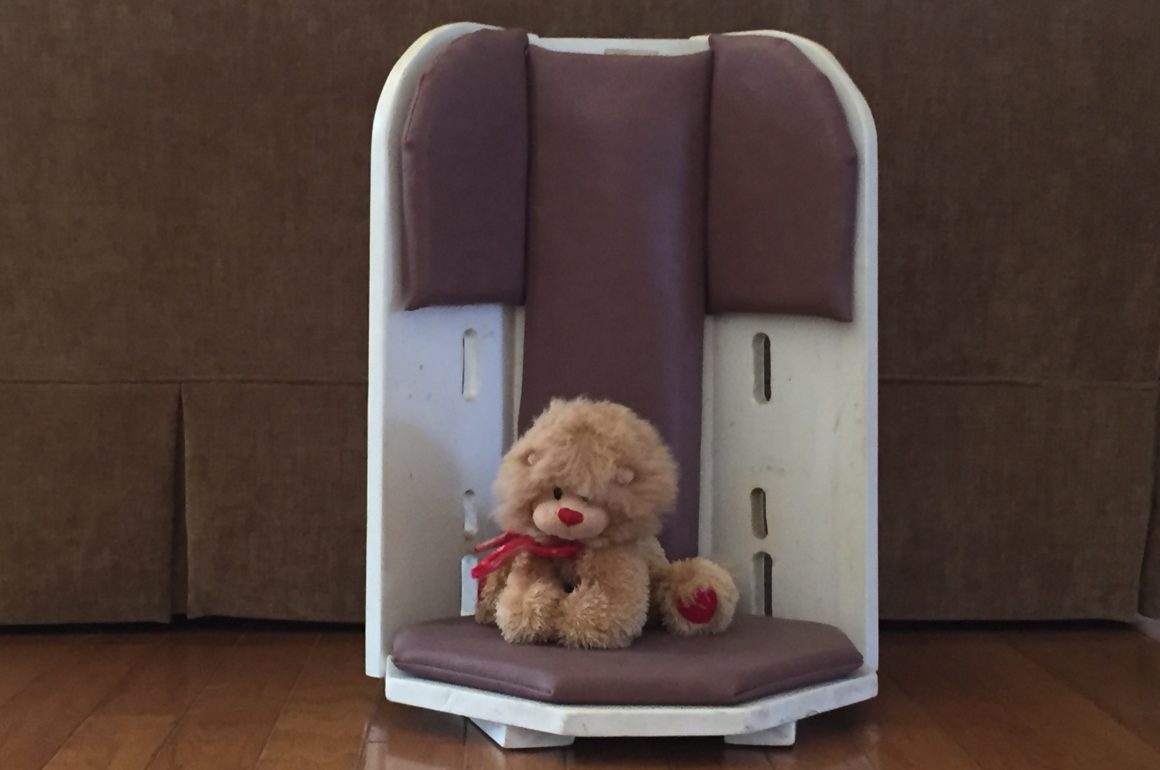 Every day, we use equipment to care for and transport Gabriella. These range from medical implements to her wheelchair and bath-chair to our minivan with its rear-entry ramp. Then nostalgia strikes, and I venture to our basement (and into the recesses of my mind) to find some of the unusual devices of her earlier years. Her corner-chair. Her prone stander. And the amazing Scalamobil.

I’ve never been mechanical and find myself intimidated by the need for adjustment and upkeep. But as with medical terminology and care routines, I’ve learned enough to get by, and then I depend on Lisa’s greater facility.

Early on we obtained her Panda stroller, the subject of a drawn-out battle with our insurance company. Like much of her equipment, the Panda served both our daughter’s needs and our own. A buggy transferable between indoor and outdoor bases reduced the mud her baby stroller tracked inside and simplified getting her around when we left home. It also helped us all transition, both physically and emotionally, to a time when she would need a full-size wheelchair.

Gabriella was born with low muscle tone, lacking the strength or agility to crawl on her own. It thus became vital to stretch her and position her on the floor. For this purpose, we got her the Tadpole tumble forms positioning equipment. Each piece contained foam covered in a colorful smooth plastic shell in a different shape. We’d use a blue wedge to support knees with contractures that impeded bending, or a red triangle along her side to keep her balanced while lying on her belly.

Some devices came as a result of surgeries. I’ve written about her comic adventures with tiny eyeglasses and contact lenses following her cataracts surgeries. She wore a soft foam-filled cap after they excised the tumor from her skull. Both encouraged us, representing part of her healing process.

Sometimes, insurance covered the expense, but more often we needed to make the investment ourselves. And then there were the gifts of ingenuity. Lisa’s sister Joanne built Gabriella a marvelous corner-chair that we strapped her into with Velcro; this provided our daughter with comfort and support for several years (see this week’s image). On a smaller scale, an aide at Lakeview School customized a spoon with a smooth curved handle that Gabriella held to feed herself. The love that went into crafting these solutions brought us appreciation and joy.

Other equipment strengthened her bones and muscles. Her physical therapists at school used a prone stander, as large as a piece of furniture. They would angle Gabriella forward on her chest and belly and thighs, secured in several places. This device promoted weight-bearing and gave her a sensation much like being upright. They also introduced us to adapted tricycles. Because she’s a kid who is happiest when she’s in motion, riding was an exciting sensation for her.

To bolster this strengthening outside of school, we got a stander and an adapted tricycle for home. We used each with some trepidation, and soon decided to focus her strength-building at Lakeview, under the oversight of trained therapists. Then Gabriella’s scoliosis worsened and we had to stop using either device even there.

Of all her equipment, the most remarkable was the Scalamobil. Advertised as a stair-climber, the Scalamobil replicated the motion of ascending or descending steps.

We live in a center-hall Colonial, with the bedrooms on the upper floor and the living space on the lower. When she was younger, Gabriella weighed so little that carrying her to and from her room required little thinking. Her weight remained in the bottom 10% for her age, but as she approached fifty pounds transporting her up and down became more difficult.

When the vendor unboxed the Scalamobil and demonstrated it on our staircase, five steps to the landing, then eight more upstairs, we were filled with wonder. The device had three wheels on each side, large on the inside, small in the middle, and a third on the exterior. When backed against the lowest stair, they moved like gears to gain a foothold on the step above, then gyrated to lift the chair. Coming downstairs, they reversed direction, with one securing the next step before descending.

Once convinced it was safe, we lifted Gabriella into the seat. The Scalamobil had a lap-belt and a harness strapped across her chest, and a foot-stool fitted to its base. At first, she looked frightened at the whirring and rising, but soon it was part of our daily routine, more important as she gained weight.

Gabriella has introduced me to a world of equipment I would never have known otherwise. Home-made and custom-built, simple and miraculous, these devices each proved essential to our daughter’s development.